Many moons ago, Linden Labs released Mesh and Rigged Mesh on to the grid, and it was good.
But it didnt take designers long to sit down and say well, this is a bit naff isnt it?

Of course, I refer to Rigged Mesh and its massive amounts of limitations and short falls that left people with conforming clothes that didnt fit unless you actually created 3 or more versions of each product for different sizes.
Customer then had to mess about altering their shape to fit the said products.
And dont even get me started on the limits of completely replacement avatars...

Since then, the designer community has begged and pushed for Linden Lab to create a stable way of actually getting Rigged Mesh items to work with not only the hard skeleton deformers, but also the corresponding soft deformers (such as muscles, boobs, bums etc).
Ironically it took pre-exisiting technology and some very innovative designers on SL to "tweek" that tech and use it for things it shouldn't do.
But the aptly called "Liquid Mesh" didnt offer everything, so when Linden Lab announced they were going to officially adopt the technique and improve it to create the less aptly named "Fitted Mesh", it was a revelation.

Which brings me full circle to the point of the post.

You will now find in the vString Store, the all new vString Revolutions.

The Revolutions are the first Implants on the grid to utilise Fitted Mesh, and to say they are very different from what people are used to with implants is an understatement.
Using forwarding thinking design, the Revolutions compared to traditional implants are rather less that regular vStrings. Many of our usual suspects like Milk, Chains, Resize, and leashing are gone, and other features like the piercings have been cut down to just 2 options.

So far these sound less than perfect, however dont be fooled by the lower spec. This is more than made up for with the way Fitted Mesh works.
Fitment wise, you dont have to do anything - you wear these and no matter what shape you have on, they will instantly conform to your avatar and fit perfectly.
Changing the size is easy. Just as you would edit your avatars shape, the Revolutions use the same system, so to go bigger, you just increase the breast size on the avatar, and you can also change the cleavage and breast buoyancy too.
Finally, and this bit is perhaps the best part. Fitted Mesh utilises Avatar Physics - the same system that makes the standard avatars butt and boobs jiggle and bounce. Yes, for the first time, you can have realistic bouncings and jiggling implants.

Its really difficult to describe these, so check out the demos in store to see what all the hubbub is about. 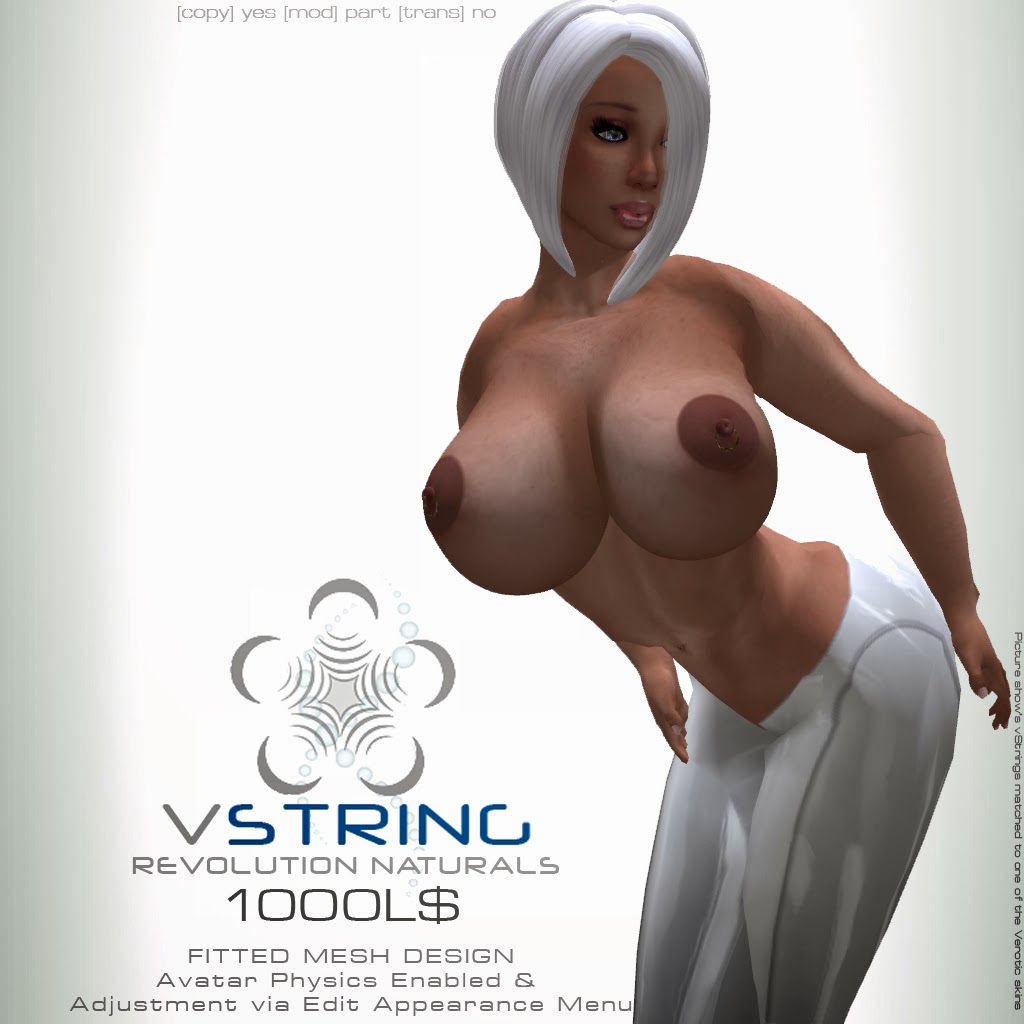 Dont get overexcited though.
Sadly as I have mentioned before, the most popular viewer on the grid, Firestorm, are not playing ball at the moment. Fitted Mesh as an official standard was released by the Labs on the 10th Feb, however Firestorm have said for reasons unknown, they wont get their Fitted Mesh update out until around the 9th March.
That means if you are on Firestorm or anyone who views you using Firestorm, all thats seen is Spaghetti as the viewer doesnt know what to do with Fitted Mesh.
Oddly though all the major current viewers that are being updated have moved to Fitted Mesh, with the exception of Firestorm. The Official Linden Lab Viewer, Singularity, Kokua and Black Dragon all use Fitted Mesh, so if you want to be up on the latest standard, you will need to use one of those or wait for Firestorm to get the job done.
Posted by Violet Studios at 01:57