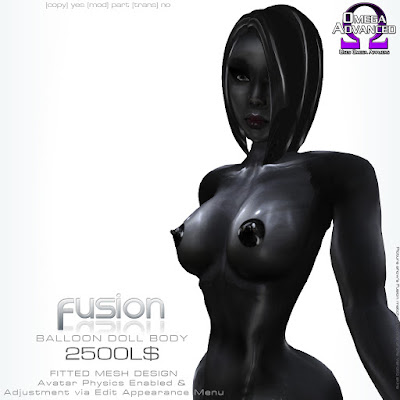 Sometimes, things just take a while to get right.
People have seen the Balloon Doll in testing now for in short... years, however with an idea like this its a labour of love (or insanity) and I am never one for throwing out half baked ideas.

Its in store now. The price is 2500 - a bargain considering how long its taken to develop. 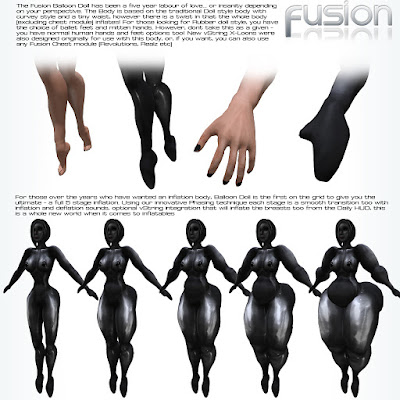 Its called Balloon Doll for a reason, that should be obvious from the above picture. It actually inflates using our first on the grid Phasing techniques to create a transition between the various states.
With Doll proportions, you also get many options over how you configure yourself. If you want to go human, you can, with hands and feet available, or if you want to go more rubber like you get the choice of Mitten hands and Ballet style feet.

As you can see on the pictures you also get a limited use version of the new LTX Rubber Skin due to arrive shortly in store with the options included on the designer hud and a tattoo layer head texture.

I would like to also apologise over how long this has taken to arrive. It was due out when we released the Balloon Dolls companion product - the vString X-Loons, however the unexpected rebuild of Fusion put things back a great deal.

Overall this is a fantastic niche market product for those people who love inflation. 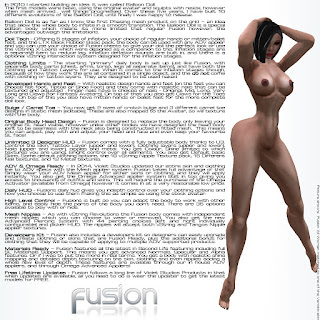 The Balloon Doll History
The Balloon Doll was an original idea started (yeah, try and believe this) back in 2010 as a starting premise.
In 2011 the first Version of the Balloon Doll was created, using very primitive by today’s standards Sculpt and Resize system mixed in with alpha masked part of the stock SL avatar. At the time it was exceptionally neat, but in my books nowhere near good enough to release to the public.
So I sat on it, and thought how I could make it better as it gathered dust.

In 2012, came a break through. After experiment with Rigged Mesh, I found you could create a “staged” doll body using different parts, and after months of on and off fiddling, came the Mark 2 Doll. This was a quantum leap over the first version as it was seamless.
However this formed part of my experiment in to Rigged Mesh and what it could do and I was that disappointed, I sat on it for a while again.

Early 2013 came a third break through with the idea of Phased Mesh which forms the current basis of the Release model doll. Phasing uses phasing in and out tech to create the illusion of growth. With more refinements the body looked great, but... I was unhappy with the original LTX skin I was using – it didn’t feel fluid enough. Back to sitting on it while I came up with fresh ideas.

Over the next year, I played more with the Doll body, going through version 4, 5 and 6, introducing improvements across the body, looking at how I could improve it as I learnt more about mesh work, and also developing the basics of the new LTX rubber skin. But at its heart, that issue over Rigged Mesh still nagged at me.
In 2014, I started working on Fusion, and during that year the Doll body was put on the back burner again with occasional promises to people who had seen it that it was coming.

In late 2014, as Fusion slowly rolled in to store, I took several breaks to relook at the Doll.
With the Version 7 body, I applied design techniques used in Fusion to the original body, improving it again and converting the basic body to fitted mesh. Now the body had lost alot of it original problems surrounding rigging. And By this point, I was eager to try to get this released, but as always things were bothering me.

In early 2015, The Doll Body got a massive work over, using techniques from Fusion to create a hybrid body. This new version had separate hands and feet, modular breasts, and Fusion like clothing and control systems. And this point, the Version 8 body was on the verge of release but as other projects took priority, I sat on it a little longer as (you guessed it) some things were bothering me.

In May 2015, I decided to get down to the job of getting the body released, and as I chewed over things in my mind over the issues surrounding the body, things got rather out of control again.
As such the Version 9 body was created. Version 9 goes full circle, as rather than partly imitating Fusion, everything was converted over to Fusion.
Now compatible with Fusion chests, and using a 95% Fusion body system (the arms by nature don’t behave like Fusion and there is no asymmertics on this body), I reworked all the mesh elements to perfection.

And then came a delay due to an expected full Fusion rebuild. While I was working through these revision, improvements from Fusion 1.5 were added in creating the 10th version.

Oh... a footnote. This body is tied to two other projects too.
Originally I had an idea for some vString Balloon Breast as a companion to the body. These have followed a similar development cycle to the body, being redesigned and reworked multiple times. These will be available in store soon.

On the other side is the LTX Rubber Skin of which you get the basic Black skin included with the Fusion body, however with 10 colours, each with 6 make up options, and coming with Breasts and ADV Mesh appliers, as well as a classic SL skin, these are available in the LTX Store.