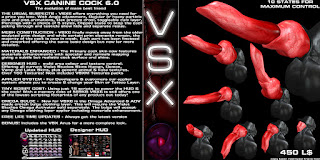 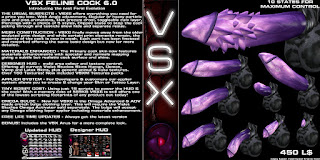 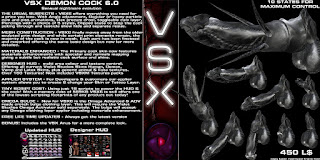 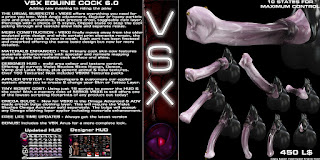 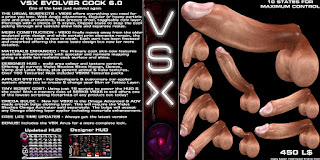 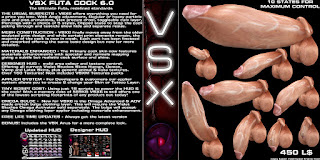 In 2009 I released VSX on to the grid with great acclaim. VSX was under constant development until 2013 when I released VSX5, the final version of the products.
At this point VSX was to be replaced by the newer VSXM series of products, however I did keep VSX out there.
While I am always one for improving products, I must also consider that these products should remain true to their original design and format. With VSX5, I had produced what I considered at the time to be the ultimate VSX product line. However they remained sculpted items, rather than mesh.

As far as I was concerned, VSXM is a superior product, and at the time I thought sales of the original VSX product line would decline to such a point they would be no issue with removing them from my product line up.
I did get something of a surprise when they didn't decline in sales. In fact even now over three years later, VSX is still selling on a regular basis, on the market place and in store.

I have, in the back of my mind had a series of possible upgrades that could be done to the VSX Line as new technologies came about and steadily a list of reworks was drawn up to improve the product.
At the end of last year I started putting these redesign ideas in to development and now the first batch of products is ready.

In this initial release you have the original VSX Futa, Evolver Human, Canine, Equine, Demon and Feline. At first glance, it all looks pretty much the same but there is far more going on under the skin. I will run you through exactly what I have been up to.

Materials Enhancements. Part of the reason for doing the mesh move was so I could integrate on to the products Materials. No fancy huds or multiple choice options though. Just a simple realistic style skin normals map to give depth and a light reflective shine layer to give extra depth. That all said the results are really quite nice.

Omega Ready Bulge. One thing I have been asked for a lot is on the clothing bulge. Originally designed for generic textures, this updated version comes mapped to the SL avatars crotch. What this really means is rather than having to build custom textures or the likes to match a clothing outfit, the bulge will now accept SL Textures. The Adult HUD now also has Omega Advanced integration on it borrowed from my Fusion bodies line up. It will need to be activated, but once it is, you will be able to enjoy using proper matching textures. The Omega Installer costs 99L$ and if you already have it, just wear it and it will activate the hud. Sadly I have had to remove the options on the bulge though. You only get the one bulge now.

Overall I think customers will love the upgrades and the new level of detail VSX6 offers.
I will however once again say though I think this is going to be the last upgrade to VSX.
Posted by Violet Studios at 09:08